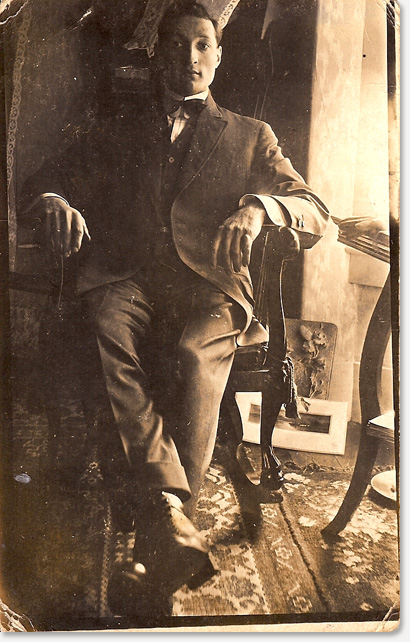 Luigi Del Bianco was born aboard a ship near La Havre, France on May 8, 1892. His parents, Vincenzo and Osvalda, were returning from the United States to Italy. When he was a small boy hanging around the wood carving shop of his father in Meduno, Pordenone province, men of the village used to say, “How curious the little one is!” Vincenzo Del Bianco became convinced that his son was interested in carving and had more than ordinary ability. He later took the 13 year old boy to Austria to study under a skilled stone carver. After 3 years in Austria, Luigi studied in Venice. In 1910, when Luigi was 18 years old, he boarded the La Touraine out of Le Harvre, France and headed for America.

When World War I broke out, Luigi returned to Italy to fight for his country. After the war, He emigrated back to Barre, VT. in 1920 and after a year of work as a stone cutter, he settled in Port Chester, NY where he met his wife, Nicoletta Cardarelli.

It was his brother-in-law, Alfonso Scafa, who introduced Luigi to Mount Rushmore designer Gutzon Borglum. “Bianco”, as Borglum affectionately called him, began working at Borglum’s Stamford studio and the association of the two men continued until Borglum’s death in 1941.

Throughout the 1920’s Luigi assisted Borglum with Stone Mountain in Georgia and the Wars of America Memorial in Newark, N.J. Because of Luigi’s strong stature and classic Roman features, Borglum used him as a model on 20 of the figures on the Newark sculpture.

In 1933, Borglum hired Bianco to be chief stone carver on the Mount Rushmore National Memorial. Luigi’s job was to carve the “refinement of expression” or detail in the faces. He was paid 1.50 an hour; a considerable sum for the Depression.

It was “Bianco” who carved the life-like eyes Lincoln. In a 1966 Interview with the Herald Statesman in Yonkers, NY, he said about carving the eyes, “I could only see from this far what I was doing, but the eye of Lincoln had to look just right from many miles distant.” “I know every line and ridge, each small bump and all the details of that head (Lincoln’s) so well.”

It was “Bianco” who also singlehandedly saved the face of Jefferson; a task Gutzon Borglum would have entrusted to no one else. In Judith St. George’s book,  The Mount Rushmore Story, she writes:

“Luigi Del Bianco, one of the best stone carvers Rushmore ever had, patched the crack in Jefferson’s lip with a foot deep piece of granite held in place by pins- the only patch on the whole sculpture, and one that is hard to detect even close up.”

St George goes on to reinforce the value of “Bianco”: “At least he ( Borglum) now had the funds to hire skilled carvers, a lack he had been bemoaning for years. But to his surprise, with the exception of Luigi Del Bianco, few of the carvers worked out.”

In 1935 Luigi brought his wife and 3 sons, Silvio, Vincent and Caesar to live in Keystone.  The boys went to a one room school house, rode horses, became blood brothers to the Sioux and swam naked in the nearby streams.

By 1941, funding for the memorial had run out. The breakout of WWII also slammed the lid on any further carving. Luigi returned to Port Chester and his stone cutting shop where he carved approximately 500 tombstones out of rough Vermont marble.

Luigi never forgot his roots. He made many a pilgrimage back to Meduno to visit relatives and old friends. Meduno takes great pride in their native son and has included in their local museum many photos and memorabilia of Luigi Del Bianco and his time at Mount Rushmore.

The citizens of Port Chester, NY also remember Luigi well, as the dapper gentlemen with the fedora on his head and the gleam in his eye, who loved to walk the Italian section of Washington Park and share stories of his adventures on the mountain.

“I would do it again, even knowing all the hardships involved”, Luigi stated in a 1966 interview with the Herald Statesman. “I would work at Mount Rushmore even without pay, if necessary. It was a great privilege granted me”.