Out of Rushmore’s Shadow – The Luigi Del Bianco Story 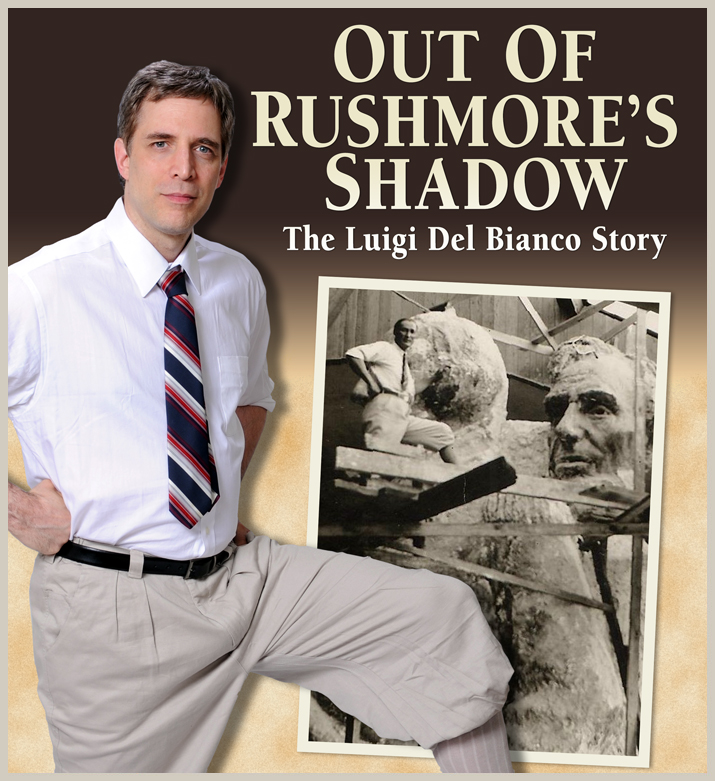 In this 45-minute special presentation for the entire family, storyteller Lou Del Bianco portrays his grandfather, Luigi Del Bianco, and talks about his unsung contribution as chief carver on our nation’s greatest memorial, Mount Rushmore. Lou uses authentic photos, timelines and primary source documents to bring Luigi’s story to life. The presentation culminates with designer Gutzon Borglum’s praise of Luigi, the 25 year struggle to get him recognized and the CBS SUNDAY MORNING tribute where a plaque at Mount Rushmore is finally unveiled! Now a published book authored by Lou, “Out of Rushmore’s Shadow” is a dramatic and touching story about Luigi’s legacy and the immigrant struggle.

After 70 years, the “story in the stone” will now be shared for years to come!

CHECK OUT MY LUIGI SHOW FOR CHILDREN!

CHECK OUT MY OTHER ONE MAN SHOWS FOR ALL AGES!

“During Lou Del Bianco’s touching tribute performance to his grandfather, the students and teachers were brought back in time to experience the creation of one of our country’s greatest monuments, Mount Rushmore. He immediately grabbed the attention of every student.  In addition to learning the history of Mt. Rushmore, students also learned about Italian culture, immigration, and geography through the eyes of “Luigi”.  It was an overall moving performance with Lou Del Bianco at his finest!”

“Earlier this year I came to learn about Lou Del Bianco and his work. I can confidently say it was probably the most interesting and well received presentation, not only at this convention, but at all the conventions I can remember over the years! What a great way to learn about the history of his grandfather and Mount Rushmore… (It) should not be missed by anyone who has an interest, not only in Mount Rushmore, but in our great country as well.”

“The show reenacts the best that America has to offer by making clear the links between the opportunities offered by our immigrant community and the its contribution to the making of an American landmark. Not only was Mr. Del Bianco’s performance educational…..it was inspirational. (It) served as an uplifting commemoration of both the recent history of our community and Mount Rushmore. I have no doubt that if Mr. Del Bianco’s show were to be bought to Mount Rushmore you would be similarly impressed with this truly American story.”