“Carving a Niche for Himself:
The Untold Story of Luigi Del Bianco”

“Luigi Del Bianco may not be a household name to many historians,a but he should be. He played an integral role in the creation of Mount Rushmore, specifically, that of chief carver. Was Del Bianco slighted due to his Italian heritage? Gladstone more than suggests he was. This book will be an inspiration to Italian Americans everywhere, and sheds new light on the role of Italians in America’s history.”
—Marilyn Borner 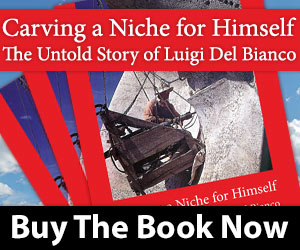